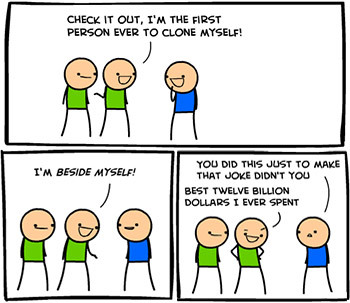 "Our top story today: Convicted hit man Jimmy 'Two-Shoes' McClarty confessed today that he was once hired to beat a cow to death in a rice field using only two small porcelain figures. Police admit this may be the first known case of a knickknack paddy-whack."
— Colin Mochrie, Whose Line Is It Anyway?
Advertisement:

These are jokes that require so much setup and work behind the scenes that you would wonder why the effort was made, but you don't because it's just that funny.

Compare Friendly Scheming. Also compare "Shaggy Dog" Story, which is a long story or joke that seems like it will lead somewhere but doesn't; Brick Joke, which is a gag or plot element that simply comes back much later; and Henway, which is a joke specifically set up to "trap" the listener. The end result may get a Lame Pun Reaction. If the joke is specifically a short story with a pun at the end, it's a feghoot. If the punchline never comes or isn't necessarily humorous, see Anti-Humor.

See also Disaster Dominoes, which when Played for Laughs is a slapstick gag which needs a lot of events occurring in succession, and Feghoots, which are long and typically over-complicated stories for the sole purpose of setting up a Pun at the end.