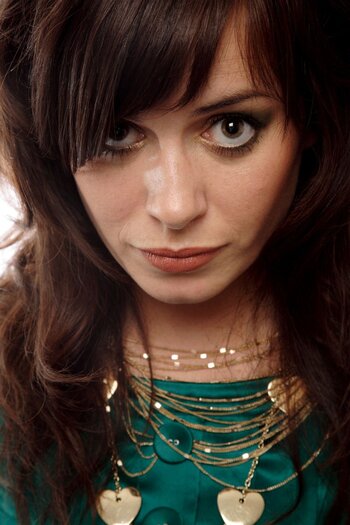 Eve Myles (born 26 July 1978 in Ystradgynlais, Wales) is a Welsh actress best known for playing Fair Cop Gwen Cooper on Torchwood. She got her start on the stage, playing Lavinia in Titus Andronicus, Bianca in The Taming of the Shrew, and various other roles. She also appeared in EastEnders and Tales From Pleasure Beach.
Advertisement:

Eve Myles guest-starred in the Doctor Who episode "The Unquiet Dead" as Gwyneth (ancestor of Gwen), and her performance impressed Russell T. Davies, who made her a lead on Torchwood. The fourth series, subtitled Miracle Day, saw her move to Hollywood for the shooting, and she expressed interest in returning there.

Outside of the Whoniverse, Eve Myles has acted in Belonging, Merlin, Little Dorrit, and the second season of Broadchurch as well as voicing the elf Merrill in Dragon Age II. She lives with her husband Bradley Freegard and their daughters Matilda (born 2009) and Siena (born 2014).