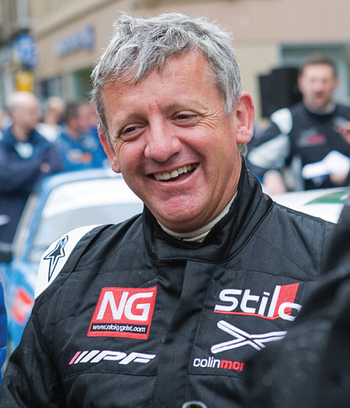 The Welsh chap many a PlayStation player would be familiar with.
Nicky Grist (born November 1, 1961) is a Welsh former rally co-driver and entrepreneur, who is perhaps best known for being one of the co-drivers for Colin McRae in the World Rally Championship, and consequently his voice acting roles in the Colin McRae Rally and DiRT series of games.
Advertisement:

Grist initially took up golfing from his grandfather whilst growing up in Abergavenny, later leaving school at the age of sixteen after being offered a position as an assistant professional golfer. Suffice it to say, he got bit by the rallying bug after watching a series of road rallies near his place, and applied as a car salesman so he could support his newfound hobby. His first rally was the George Ford Pips Rally, held in Caldicott in Wales, in a Ford Escort with Bryn Wiltshire driving.

His first foray into professional co-driving was with Ford driver Malcolm Wilson, who drove in a Sierra RS Cosworth. He briefly competed alongside Mikael Ericsson and Armin Schwartz in a number of events before being teamed up with Juha Kankkunen for Toyota, where they scored four rally wins from 1993 to 1995, and a championship win for Grist in 1993. 1997 was when he worked with Colin McRae, first for the 555 Subaru World Rally Team and later for the Ford factory team, both of which would he be best known for especially when the video game series was released to which both he and Colin lent their voices. Their partnership wasn't to last though, as a series of disagreements with him and Colin caused the two to part ways most notably when Colin sarcastically called Nicky "the Welsh Wizard" after an incident where the two incurred a time penalty; he later took the nickname in stride though he wasn't too keen at using it, and he's very much glad that it didn't catch on.

In the meantime he worked as a television presenter and colour commentator for the WRC and Speed TV in the States, and also provided behind-the-scenes work as he helped set up the technical aspects and camera positions using his extensive knowledge of rallying.

Grist and McRae later reconciled though, but were no longer competing together in top-level rallying save for a number of one-off rallies and occasional WRC events like in Wales Rally GB, where they competed for Skoda, and on X Games 12 in Los Angeles where they nearly beat rally driver-slash-stuntman Travis Pastrana by just half a second, bringing them to the attention of the mainstream American audience who have never heard of them outside of video games. Grist and McRae's last WRC appearance as a team was in Rally Turkey in 2006, driving for Citroen.

, though he would appear in various television programmes and as a guest speaker in motoring events throughout the UK and elsewhere, usually sharing his rallying exploits and experiences.

Tropes associated with Nicky Grist include: