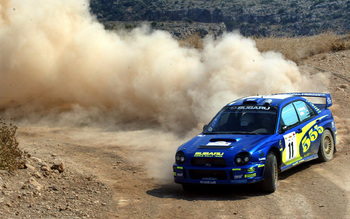 "40, Four right, keep middle over crest..."
"If in doubt, flat out,"
—Colin McRae
Rallyingnote This page refers to the motorsport of rallying, rather than other uses of the word rallying that may appear in the English language, a list of which can be found here

is a motorsport in which drivers and co-drivers compete against the clock to be the fastest from point A to point B. By 'against the clock' we mean that each car is sent out at spaced intervals; you're not going to see a NASCAR-style Big One.
Advertisement:

Courses are practically never purpose built. Instead, they're laid out along normal roads closed to traffic. Note that these need not be paved. Or dry. Asphalt, dirt, gravel, rain, snow, whatever. This leads to one of the more popular images, a rally car exiting the intended route with plumes of dust trailing it — and depending on drainage ditches, roadside obstructions, and the mood of the racing gods, landing on a side other than the one with wheels. This goes back to the roots of rallying, which are around the roots of the automobile itself—after all, no-one was building super-speedways or elaborate road course tracks in 1890.

The co-driver is more than just a passenger, mechanic, or a guy to help roll your car back on its wheels when you dump it in a creek. In-car video and audio will often feature the co-driver looking over a detailed set of notes and reading instructions to the driver regarding road conditions and what's ahead — some of these drivers have become so well-versed with rallying that they can practically drive blind

with only his / her co-driver's pacenotes guiding their way through. In most professional rally events, the notes are provided by the organising staff well in advance, or even by the driver having taken a dry run along the coursenote This is what is known as reconnaissance or colloquially a recce (pronounced as "wre-kee") ... but in older or lower-division rallies, the course itself may be kept secret until the end.

The World Rally Championship has done much to popularize the sport around the world with its distinct driving style; the low-grip road surfaces encourage drifting to the point that some fans have joked about rally drivers never looking out the windshield of their cars. Fans at rally stage events can have another unique experience ... safety allowing, they can go out and aid a driver! This is usually not frowned upon, as the usual case where a fan would have any way of aiding the driver is the position of a car being 'off track' and likely 'on lid'.

The cars themselves tend to be what Americans might consider 'compact'. Ford's Escort (and later Focus), Subaru's Impreza, and Toyota's Yaris and Corolla are things most Yanks can find around town. Other marques participate, too: watching WRC footage may be the first exposure of a North American fan to Citroën, or SEAT, or Škoda.

In The '80s, rallying used cars that had significantly loosened restrictions compared to the rally cars of The '70s in terms of power output and use of materials, leading to the development of exceptionally powerful and fast (as well as unsafe) rally cars. This category of cars was known as Group B. Major manufacturers like Audi, Peugeot, Lancia, Ford, MG Metro, Porsche (at one point even Ferrari was considering joining in, the Ferrari GTO started development as a Group B car), and many more competed for dominance in an attempt to create the ultimate AWD rally car, some of which were essentially In Name Only versions of production cars they were based on, an (infamous) example being the Lancia Delta S4, a superficially similar yet mechanically unrelated variant of the regular Delta. The cars were so fast that the drivers were known to frequently experience tunnel vision while driving them. The class was disbanded after a series of deaths in 1986, but Group B is still recognized today as the Golden Age of Rallying.

Ironically, while the end of Group B led to several years of uncertainty and much slower cars, it meant that in the 1990s manufacturers simply switched to building souped-up road cars instead, leading eventually the appearance of cars like the Toyota Celica GT4, Subaru Impreza WRX, Mitsubishi Lancer Evo series, Ford Escort Cosworth and many others from the likes of SEAT, Škoda, and Citroën. These cars were not as powerful and as outrageous as the Group B cars but they did lead to a huge number of road-legal (almost)-rally cars appearing in showrooms that enthusiasts could actually buy, as well as giving huge image boosts to the likes of Subaru and Mitsubishi. Despite the massive power disadvantage contemporary top level rally cars are undoubtedly much faster on most stages than the Group B cars would be because of advances in suspension, aerodynamics and tyres.

Typical modern rallies last around 3 days and feature somewhere between 12 and 30 stages, linked by untimed sections driven on open roads at regular, legal speeds, and service stops, often held overnight and / or in the middle of the day.

'Rallycross' events are different: these are lap races, head-to-head, without co-drivernote Though crews do employ spotters to aid their respective drivers on the situation at hand, but unlike co-drivers, spotters do not ride along with the driver, instead watching the race from a convenient vantage point., on often purpose-built tracks. The cars are similar, though, and many techniques are too, although blocking is something a rally driver would have to learn, along with so-called "joker laps", which are extendednote Or shortened, depending on the league; Global Rallycross Championship courses typically shorten the length of the track whilst the FIA World Rallycross Championship ones are a tad longer, slowing down cars which pass by it. sections of a track where drivers must pass at least once and at the right time in order to gain a strategic advantage in a race, usually called on by a spotter via two-way radio. In addition, the sport has attracted retired rally drivers like Sébastien Loeb and Petter Solberg, who moved to the FIA World Rallycross Championship league after their stint at the WRC.

Fictional works based on rally racing