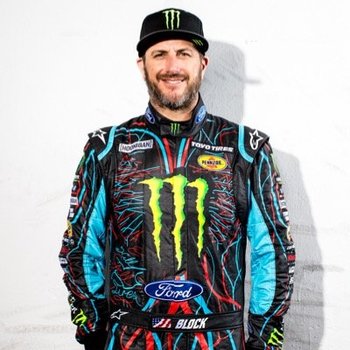 The number 43.
Kenneth Block (born November 21, 1967), known professionally as Ken Block, is an American rally driver, stunt performer and entrepreneur, best known for his Gymkhana series of stunt videos where he drifts a variety of specially modified cars in city streets and urban areas. Block has also competed in a number of extreme sports events including skateboarding, snowboarding, and motocross. He is also one of the co-founders and former owners of DC Shoes, an athletic footwear company, but has shifted his business focus to Hoonigan Industries, an apparel brand for auto enthusiasts.