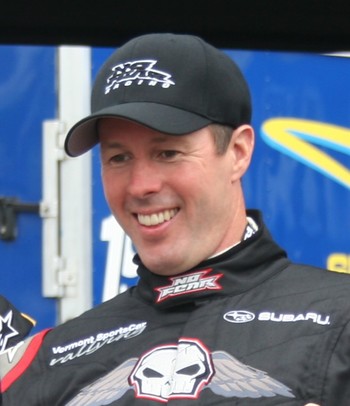 If in doubt, flat out.
"Straight roads are for fast cars, turns are for fast drivers,"
—Colin McRae
Colin Steele McRae, MBE (5 August 1968– 15 September 2007), was a Scottish rally driver who was perhaps best known for his performance under the Subaru World Rally Team and for being the face and producer of a video game series named after him.
Advertisement:

rally car, to which he won in nine events only to leave partly due to salary issues, and saw a brief stint with Citroën in 2003. After moonlighting in various motorsport disciplines, Colin reportedly planned a reunion with Subaru for the 2008 season; he died a year before due to a fatal helicopter accident which also claimed the life of his son and two family friends.