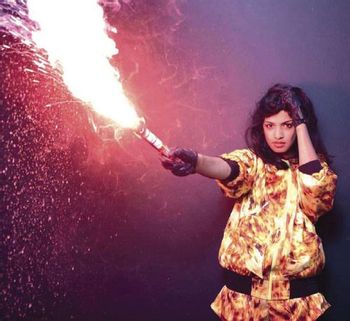 Providing the music equivalent of little girls playing hopscotch with bombs exploding behind them since 2005.
Advertisement:

Mathangi "Maya" Arulpragasam MBE (born 18 July 1975), better known as M.I.A., is an Alternative Dance singer and rapper, known for her politically-themed lyrics. As a baby, she moved with her family to their native Sri Lanka, where her father became increasingly politically active in militant activities. As the Sri Lankan Civil War escalated, the rest of the family was forced to flee as refugees, first to India and then the United Kingdom. "M.I.A." ("Missing in Action") references both her London neighborhood, Acton, and her politically tumultuous youth.

Being no stranger to politics, M.I.A. wanted to spread political topics through her dance songs. Some topics in M.I.A.’s music are identity politics, immigration, indie culture, the Internet, popular culture, poverty, revolution, war and the working class.