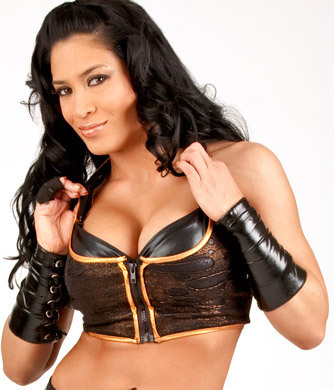 Melina Nava Perez (born March 9, 1979) is a Latin-American beauty queen from Los Angeles, California who won Miss Hawaiian Tropics Anaheim, Ms. California Belleza Latina and a couple group USA shows before turning to Professional Wrestling and eventually becoming a WWE Diva. She first became interested in a wrestling career by talking to EWF superstar Mike Henderson, which lead to her training in Jessie Hernandez's School Of Hard Knocks in 2001 and Kyra making her official debut not too long after. Kyra tried out for the third season of WWE Tough Enough in 2003, where she was one of the last cut. She continued to wrestle in Empire Wrestling Federation, Ultimate Pro Wrestling, Arizonan Impact Zone Wrestling and Mexican WWA as Kyra and as Melanie Little Deer in CRUSH (by the man who gave you GLOW) until she successfully signed with WWE in 2004. Melina initially was the manager of MNM in developmental OVW, though occasionally wrestled, sometimes as Kyra again when allowed back on independent shows, before the team moved up to the main WWE roster and Melina broke out on her own to join the Women's division. After a Heel–Face Turn in 2008 she became surprisingly over. She was eventually released by WWE in 2011 but continued to pursue work in independent promotions such as WSU as well as in those outside of the continental USA, even reappearing on national TV via Lucha Underground. She is a three-time WWE Women's Champion