Diamonds in the Buff 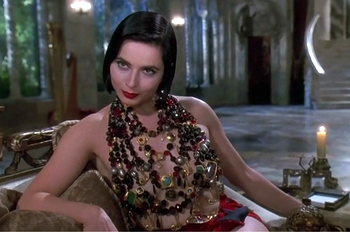 That's a pricy, yet pretty, Scenery Censor.
"That woman wasn't nude! She had a diamond in her navel!"
— How to Murder Your Wife
Advertisement:

A woman wears prominent jewelry in such a way as to draw attention to what she's not wearing. Normally done with a necklace, probably because of just where that pendant is hanging, but can be any jewelry that draws attention to itself, such as dangly earings, bracelets and bangles, or a waist chain—do they exist for any other reason? The appeal of this is that since the woman's body is adorned but not actually concealed she's showing herself off.

A Sister Trope to Naked in Mink, Sexy Coat Flashing. Some kinds of Barely-There Swimwear are made with this in mind as well.

As shown in the page image, this trope works well for a Reclining Reigner.