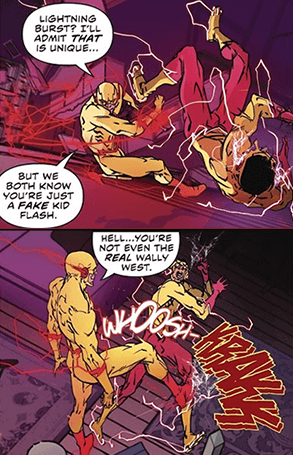 Basically, the trope is about the attitudes of those who actually belong (or think they belong) in a particular category and those who actually know them, or think they do (including their enemies) towards those who pretend to be in the category. Vampires towards Vampire Vannabes, Big Bads towards Big Bad Wannabes, real heroes towards Heroic Wannabes - you get the drift. The trope also has a number of Real Life and less fantastic counterparts, not least because of the (minor) distinctions differentiating those who would admit (if reluctantly) that yes, We ARE Struggling Together.

The attitude can vary from amused to outraged, and express itself in anything from shrugging and snarking through more serious annoyance to termination with extreme prejudice. It is not, however, incompatible with using the wannabe as The Renfield, Sycophantic Servant, or treating a group of wannabes as "useful idiots", minions, or Cannon Fodder.

It can be justified (or not) according to a number of different variables, such as whether the wannabe(s) actually stand any chance (by nature or nurture) of achieving their Wannabe goals, whether it would actually make them happy (or cool) if they did (cf. Be Careful What You Wish For, I Hate You, Vampire Dad, Super Loser), and whether there is something... questionable about their reasons for wannabeing it in the first place (e.g. white middle-class suburbanite kids pretending to be gangsta rappers, or claiming to be "spiritually" Native American, or hardcore anime fans from the west who try to emulate Japanese culture).

This trope is not uncommon (depending on self-awareness) in those on the receiving end of in-universe Fan Dumb and Misaimed Fandom, let alone in-universe versions of Draco in Leather Pants delusions. Also not uncommon, conversely, by despisers of both, whether for or against the relevant misapprehensions.

Not that the disdain always goes in one direction. The wannabes might well be trying to "clean up" the genuine guys' ethos or subculture, thus declaring themselves The Moral Substitute. The real guys might also be seen by both the wannabes and the general public as elitists, jealously guarding for themselves something that is actually part of the mass culture. (See also It's Popular, Now It Sucks!.)

Bonus points if the wannabe uses phrases like "I want to be like you!" or "But I really do understand!" or "I totally am X!"

See also Never Be a Hero. When the reason for the diss is youth and inexperience, it's While You Were in Diapers. If the disser's reason for being the real thing are very arbitrary, see No True Scotsman. If this takes place between different works and creators, see Knocking the Knockoff.

"You're No Optimus Prime"

Just because someone isn't Optimus Prime doesn't mean they're no good. Who could live up to him?

"You're No Optimus Prime"

Just because someone isn't Optimus Prime doesn't mean they're no good. Who could live up to him?