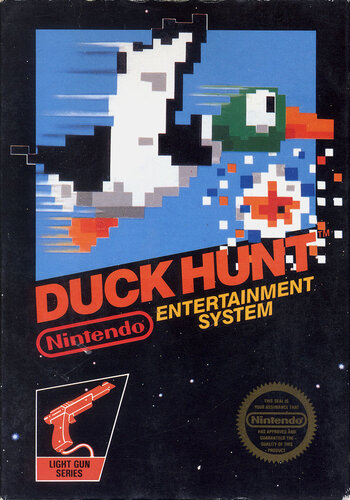 "OUCH!! SHOOT THE DUCKS. NOT ME!!"
— The Dog in Vs. Duck Hunt, the only time the dog speaks after the only time you actually get to shoot him
Advertisement:

produced by Nintendo before their video game-making days. Eight years later, it was made into the NES game as it's known today.

It's a fairly simple game. You have two options. One was going to the target range and shooting at clay pigeons to improve your aim. You could shoot at one or two at a time, and could keep going until you didn't hit as many as the round target required. Almost nobody remembers, or cares, about this part.

No, the main attraction, as you can imagine, is hunting ducks with your trusty hunting dog. Depending on the mode, he would flush out one or two ducks at a time, and you had three shots to nail the ducks before they got away. Later rounds introduced faster ducks that tried to escape more quickly. Until, of course, they wouldn't even appear on the screen, resulting in a Kill Screen.

This game overall is widely remembered for a few reasons. One of the most prominent is that it was a pack-in for most releases of the Nintendo Entertainment System, for even more versions than Super Mario Bros. Eventually the two were combined into one cartridge to be the pack-in game. It was also remembered for the Zapper Light Gun that was required to play, being perhaps the most popular light gun created. It set the standard for making home light gun games for ages.

But most of all, it is remembered to this day because of the dog, who would snigger at you

◊ whenever you didn't manage to hit a duck. And it would repeat said sniggering when (not if, when) you didn't take out enough ducks to advance to the next level and it was a Game Over. However, the reactions that followed when people found out that he's a Secret Character in the fourth Super Smash Bros. game indicated a better future for him.

Like many early NES games, it had an expanded arcade version called Vs. Duck Hunt that played a bit differently. For one, you don't have a quota to meet for each level. Instead, you have a number of lives, and failing to shoot one of the ducks results in a lost life. The stages also alternate between ducks and clay pigeons, and the game featured a bonus stage where you had unlimited bullets and simply had to shoot as many ducks as possible. The dog would occasionally appear as well and shooting him would prematurely end the stage (though most players shot him as soon as he appeared anyway).

Was announced for the Wii U's Virtual Console in a November 2014 Nintendo Direct after the unveiling of Duck Hunt's Super Smash Bros. trailer. The port requires use of the Wii Remote to simulate the Zapper.

See also Duck Season, a game that takes heavy inspiration from this game, with a heavy dose of horror.