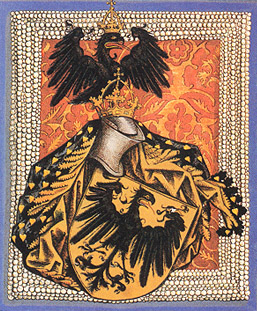 This body which was called and which still calls itself the Holy Roman Empire was neither holy, nor Roman, nor an empire.
— Voltaire
Advertisement:

The Holy Roman Empire of the German Nation (Latin: Imperium Romanum Sacrum Nationis Germanicæ; German: Heiliges Römisches Reich Deutscher Nation) started off as an attempt to revive the Western Roman Empire, turned into a German kingdom, and ended up an empire In Name Only that mostly clung to life because the ruler of Austria wanted to call himself an emperor and the rest of Europe was willing to humor him.

The Holy Roman Empire was traditionally founded on Christmas Day of the year 800 A.D., when Pope Leo III placed the crown on the head of Charlemagne in St. Peter's, and the assembled multitudes shouted "Carolo Augusto, a Deo coronato magno et pacifico imperatori, vita et victoria!" — "To Charles the Magnificent, crowned the great and peace-giving emperor by God, life and victory!" Strictly speaking, however, Charles's empire was neither Roman nor German, but Frankish — or as we might say, a sort of French-German mix (for that matter, there was a perfectly valid Roman Emperor

at the time in any casenote Or to be precise, empress, Irene of Athens. Charlemagne's supporters claimed that a woman couldn't rule the Roman Empire

. The Byzantines promptly deposed Irene and installed Nikephoros I, who was certainly a man; they were possibly disappointed that Charlemagne saw no reason to abdicate.). The Empire was not officially described as "Holy" until the twelfth century, nor officially "German" before the sixteenth. Charlemagne's empire quickly fell to pieces among his squabbling successors, and the Holy Roman Emperors themselves tended to ignore any discontinuity between pagan and Christian Rome — Frederick I Barbarossa (1123-1190) going so far as to assert that one of his reasons for going on Crusade was to avenge the defeat of Crassus by the Parthians (53 B.C.).note Never mind that the Parthians were Zoroastrian Persians and the rulers of the Middle East of the time were primarily Turkish and to a lesser extent Arab Muslims—and that the main Muslim leader at the time, Saladin, was a Kurd...

Germany as a realm separate from the Frankish empire emerged with the Treaties of Verdun (843) and Mersen (870). Modern historians tend to distinguish between Charlemagne's Empire (usually referred to as the Frankish Kingdoms or the Carolingian Empire), and the proper Holy Roman Empire, which itself is exclusively descended from the Eastern Frankish realm when the Carolingian Frankish Kingdom fractured. Thus, while Charlemagne was officially crowned "Roman Emperor" by the Pope, it is more common to refer to Otto I as the first Holy Roman Emperor. The title of "Roman Emperor" bounced around between various descendants of Louis the Pious, but the lands of the title holder varied, at first holding the entire Caroligian Empire (Charlemagne and Louis the Pious), then the Middle Frankish Kingdom (area of modern day Low Countries, Burgundy, and Northern Italy), then to just Northern Italy, and so on. The title fell out of use for 38 years, until Otto I was crowned Roman Emperor, where the title was once again in continuous use, and it became associated with the German lands. After the last of Charlemagne's line died in 911, the German nobles elected Henry the Fowler, Duke of Saxony, as King of the Germans. The coronation of his son Otto in 962 may be taken as the actual foundation of the Holy Roman Empire. The actual term "Holy Roman Empire" began to be used only during the reign of Friedrich Barbarossa two centuries and two dynasties later, reflecting Frederick Barbarossa's belief of the Emperor's supremacy over the Papacy. Prior to that, it had variously (and highly inconsistently) been referred to as "Imperium Romanum" ("Roman Empire"), "Imperium Teutonicorum" ("German Empire" or "Empire of the Germans"), and "Regnum Teutonicorum" ("Kingdom of Germany" or "Kingdom of the Germans"). Once again, readers should keep in mind that there was a still existing Roman Empire in the form of the Byzantine Empire, and the Byzantines were deeply insulted when the Pope crowned "Roman Emperors," which massively contributed to the East-West schism in Christianity. Keep in mind that at the time, the Byzantines were still calling themselves the Roman Empire and Romans (the term Byzantine didn't even appear until the 16th century, well after their empire had fallen in 1453) so the Pope was giving just about the biggest snub possible to their rulers.

The mediæval period of the Empire was dominated by a series of internal struggles with the powerful German nobility, by struggles with the Italian communes, and (above all) by the great struggle with the Papacy. Notable figures in that contest include Henry IV, whose famous submission to Pope Gregory VII (Hildebrand) at Canossa was subsequently reversed by Gregory's exile, and the aforementioned Frederick I, whose defeat at Legnano led to his submission to Alexander III. The important point here is that the Empire and the Papacy, both competing for secular and religious power over all Christendom without the means to enforce it, essentially destroyed each other's credibility. This was not helped by a fairly consistent policy of Emperors to neglect the basis of their power in Germany to grasp at its shadow in Italy - because in order for a German king to become Emperor, he had to go to Italy and be crowned by the pope. This worked much to the advantage of the nationalistic monarchies of France (especially), England and Spain.

The climax was reached with the reign of Friedrich II (1215-1250), Barbarossa's grandson, who while being an individual of singular gifts nonetheless attempted to run an Italian-German Empire from Sicily, but had come to the throne against his rival Otto IV largely as a consequence of the victory of King Philip II of France against the armies of King John of England and Otto at Bouvines. His reign had some impressive successes (he managed to get excommunicated for leading a crusade which restored the "holy places" to Christian pilgrims without anyone getting killed), but failed to establish a secure power base and got his line targeted by both the French and the Papacy, insofar as the difference mattered at that point. After his death and those of his sons, the Imperial throne itself stood empty, while the German crown was sought and won by adventurers. After this period, the Interregnum, or in the words of a German poet, "die kaiserlose, die schreckliche Zeit" ("the emperor-less, terrible time"), the Empire recovered somewhat and for a time its greats allotted the crown to the Houses of Habsburg, Luxemburg and Wittelsbach by rota.

Despite its name, the empire had many traits of a confederation, with the German King (Emperor-elect) being elected by the most powerful regional lords, at least starting around the 12th century. However, while the electors were always some combination of secular rulers and prince-archbishops (i.e. archbishops who were also the secular rulers of some or all of their ecclesiastical province), which of the secular and clerical greats of the Empire would have the privilege was a frequent source of contention.

At times, the empire consisted of over 300 sovereign kingdoms, duchies, free cities, and other entities. In the late 18th century, there were nearly 1800, ranging from the kingdom of Bohemia (=the current territory of the Czech Republic almost exactly) to the nominally autonomous territories of Reichsritter (Imperial knights, i. e. knights subject only to the emperor) and even a handful of Reichsdörfer (Imperial villages). Unsurprisingly, it often was a total chaos.

Thus throughout most of its history it is rather difficult to define the very borders of the Holy Roman Empire. Many of the princes owned large territories outside the Empire or would successfully bid for foreign crowns, such as the rulers of Austria (also kings of Hungary and, sometimes, of Spain), Hanover (who became kings of the United Kingdom), Saxony (two of whom became kings of Poland), and Brandenburg (kings in or of Prussia since 1701). On the other hand foreign sovereigns came to inherit territories belonging to the Holy Roman Empire, such as the king of Denmark in the duchy of Holstein, or conquered them (the kings of Sweden in the Thirty Years War). Territories that had become de facto independent powers would still technically considered part of the Empire (as e. g. the Swiss Confederation and the Republic of the United Netherlands were until the end of the Thirty Years War).

One of the effects of the fracturing of the Holy Roman Empire into dozens and then hundreds of sovereign states was that many princes and princesses from these states became eligible to marry into the ruling families of non-German nations, which in some cases led to branches of German dynasties to becoming the ruling houses elsewhere. One classic example is the House of Oldenburg, which split into several lines including the royal houses of Denmark (until today), Norway (until today), Sweden (1751-1818) and Greece (1863-1974), the ducal house of Oldenburg (until 1918), and the imperial house of Russia (from Peter III and Paul I to Nicholas II). Another is the House of Sachsen-Coburg and Gotha (a branch of the Ernestinian line of the House of Wettin), which since the 19th century supplied monarchs to Belgium (until today), the United Kingdom (until today, albeit under a different name, and technically about to be replaced by a junior branch of the Greek line of Oldenburgs after HM The Queen passes), Portugal (1853-1910) and Bulgaria (1887-1946note Interestingly, the last one, Tsar Simeon II, eventually retook power as the elected Prime Minister of republican Bulgaria 2001-2005, under the name "Simeon Sakskoburggotski" (the only monarch in history ever to be later become head of the elected government of the same country over which he had once reigned as king—well, tsar).).

Early on in The Renaissance, the Empire flourished briefly under Charles V, the last ruler actually crowned Holy Roman Emperor by the Pope, and the Emperor with the most extensive empire: not only did he have a firmer grasp on power within the Empire than any other Emperor for generations, he also ruled Spain and its vast New World empire directly (ruling the first "empire on which the Sun never sets"), and held substantial influence in the Italian states, Portugal, and the British Isles (all of which either consisted of Imperial client states or were so firmly opposed to France that they may as well have been client states). However, the Reformation and the subsequent Wars of Religion and Thirty Years' War effectively broke the Empire as a single political unit. Thereafter, the German states ruled themselves and were able to conclude international treaties as sovereign principalities, and the Habsburg emperors, though retaining the Imperial title, concentrated more and more to their Austrian dominions (which included Hungary, parts of Northern Italy and Southwest Germany, and, since the War of Spanish Succession, the Austrian Netherlands (most of what is now Belgium plus Luxembourg)). After the War of Austrian Succession, despite the flourishing of culture under rulers such as Maria Theresa of Austria, Frederick the Great of Prussia, and Augustus the Strong of Saxony, the empire was finished. When Emperor Francis II assumed the title of Emperor Francis I of Austria in 1804 and was forced by Napoleon to abdicate as Holy Roman Emperor in 1806, the changed reality was recognized and the Empire came to an end. Although some German nationalists dreamed of recreating it following Napoleon's defeat, all they got was the loose German Confederation (Deutscher Bund, 1815-1866).

Though the actual Holy Roman Empire lasted about 844 years, its depiction in popular culture is largely a matter of three periods: the time of the Minnesingers, the time of Albrecht Dürer; and the petty German princedoms of the late seventeenth and eighteenth centuries.

Works set in, featuring, or otherwise relating to the Holy Roman Empire: