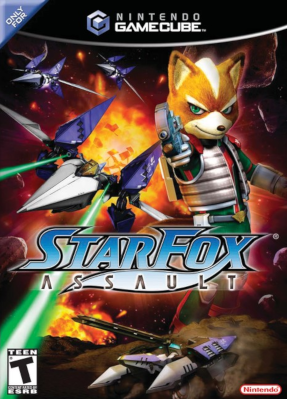 Star Fox: Assault is the direct sequel to Star Fox Adventures, and returned more to the genre and gameplay of the preceding Star Fox games Star Fox and Star Fox 64. It was released on Nintendo GameCube in 2005. Continuing the trend of all Star Fox games (except 64), the game was not developed by Nintendo itself — this time, Assault was developed by Namco.
Advertisement:

One year after the incident on Sauria the Star Fox team is hired to help take down the remnants of Andross' forces. However in the midst of this battle a new enemy emerges to threaten the Lylat system. The aparoids, a race of insect like creatures begin an invasion of the system with the goal of assimilating all life into their collective hive. With the Cornerian military outnumbered and outgunned, it's up to Star Fox to track down information leading to the aparoid homeworld and defeat this menace once and for all.