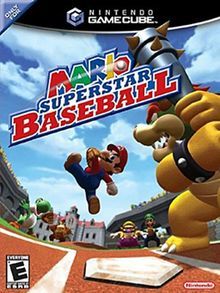 Mario Superstar Baseball is a Mario baseball game for the Nintendo Gamecube released on June 21st, 2005 in Japan, August 29th, 2005 in the United States, and November 11th, 2005, in Europe.

The plot (as told by Challenge Mode) is that the main cast has gotten into playing Baseball recently, including Bowser, who challenges the main characters to face his team. Mario, Peach, Yoshi, Donkey Kong, and Wario accept this challenge and form their own teams, all itching to prove to the others and Bowser that they're the best baseball team around.

Its sequel, Mario Super Sluggers, was released three years later on the Wii.

Page is a work in progress!