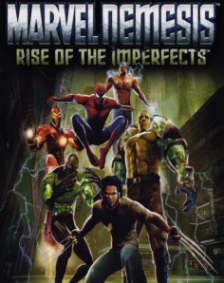 Clash of the Super Heroes.
— Back of the Box
Advertisement:

Marvel Nemesis: Rise of the Imperfects is a Fighting Game developed by Nihilistic Software, published by Electronic Arts, and released in 2005 for the PS2, Xbox, Nintendo GameCube, PSP, and Nintendo DS. Based on the Marvel Universe, it was meant to be the launch of the Imperfects team, a group of horror-inspired Anti Villains led by the tribal-turned-living weapon Paragon, all of them created and owned by EA, and was promoted with a comic miniseries loosely following the game's story. It is most similar to Power Stone, Ehrgeiz, and Super Smash Bros. Gameplay consists of a fairly free-form fighting system, complete with dodges, blocks, get-up attacks, uppercuts, and air tackles. Using the super button allows the super version of each of these abilities, being more powerful but also depleting the super bar.

The game structures itself around the city of New York falling into chaos with an alien invasion, where heroes such as Captain America (depending on the console) and the Hulk are seemingly killed while the Punisher is missing in action, and the appearance of a mysterious new superpowered group called the Imperfects. This also sets the game up for its dark tone.

Many early announcements identified the game as "Marvel vs. EA", and if you're having trouble naming any iconic EA characters in its release's time period that predated the likes of, say, Mass Effect (John Madden aside), then you understand the initial skepticism the game received before it was announced that the non-Marvel characters would be all original. It sank so hard that Marvel ultimately cut all ties to EA (putting the kibosh on a planned sequel intended for 2008) and returned to Activisionnote and sometimes Capcom for video game business.

Marvel Nemesis: Rise of the Imperfects provides examples of the following tropes: