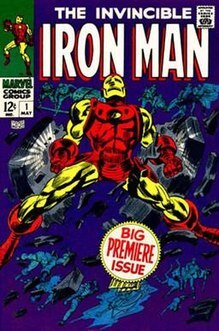 Tony Stark was a genius playboy billionaire industrialist until a battlefield explosion left him with a damaged heart that threatened to kill him. Captured by the enemy forces, he is forced into manufacturing weaponry to aid them. Instead he secretly designed and built a suit of armor (IN A CAVE! WITH A BOX OF SCRAPS!) to keep his heart beating and to escape from his captors, and in the process became the superhero known as Iron Man. The character first appeared in Tales of Suspense #39 (March, 1963), created by writers Stan Lee, and Larry Lieber, along with artists Don Heck and Jack Kirby. He has served as the protagonist of several series since that time.