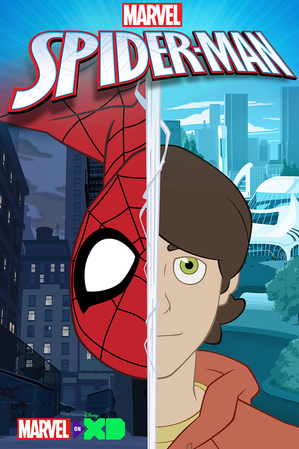 Marvel's Spider-Man, or simply Spider-Man, is a 2017 American animated series based on the Marvel Comics character of the same name, produced by Marvel Animation and airing on Disney XD.

The show presents a back-to-basics approach following Ultimate Spider-Man (2012), focusing on the early days of Peter Parker's career as Spider-Man, while having to balance his superhero life with school and his personal relationships, while battling his rogues gallery for the first time.

Compared to previous iterations of the characters, this show is notable for a considerable emphasis on the theme of science; Peter's science geek personality is played up, and has him recruited in the genius kid school of Horizon High (a school version of the Horizon Labs company from the comic).

Aside from Peter himself, other Spider-adjacent heroes like Miles Morales, Anya Corazón, and Spider-Gwen also appear.

Not to be confused with the PlayStation 4 video game of the same name.