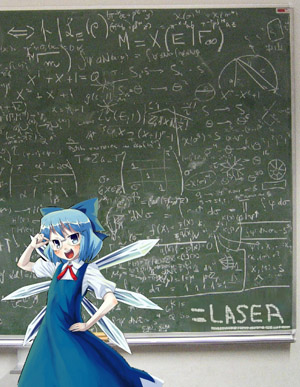 So you see, it's perfectly simple. Any questions, class?

"One through nine, no maybes, no supposes, no fractions. You can't travel in space, you can't go out into space, you know, without, like, you know, uh, with fractions—what are you going to land on? One-quarter, three-eighths? What are you going to do when you go from here to Venus or something? That's dialectic physics."
— Photojournalist, Apocalypse Now
Advertisement:

As You Know, some writers didn't exactly do well in math class. So, it seems that, with the passing of time, all their knowledge of math was condensed into a pile of information that they now paste on every chalkboard in school scenes or write in class notes, regardless of the knowledge necessary to understand those equations.

For example, a first-grade class will sometimes have lots of Gratuitous Greek such as "pi" (π) written on the board, which would probably only confuse the students who would only be learning arithmetic. Other popular examples are integrals, and their well-known "large S" ( ∫ ) symbol. Very often, however, there won't be any variable of integration. Elementary algebra will be represented as something like "x + y = z", which is entirely meaningless without a description of what the variables represent or how they relate to each other.

Then there's E=mc2, the famous equation which has been degraded into nothing but a complex-looking decoration in everything from kids' cartoons to science shows. (E=mc2 is actually Albert Einstein's formula for mass-energy equivalence

; far more people have heard of it than have any idea of what it actually means.) Especially comical if it's pronounced "eeyemseetwo" by people who don't realize the two represents an exponent.

Also related to relativity,note but this time general relativity instead of special relativity, the Einstein field equations (Rab - (1/2)gabR = (8πG/c4)Tab) are rising in prominence as a decorative formula, as E=mc2 has started to become a cliché. Loosely, the terms of the left describe the curvature of space-time (which is perceived as gravity) whereas the terms on the right refer to the distribution of matter.note  Solving these equations even for the simplest cases is far beyond almost anybody's abilities; solving them for our own spacetime has not yet been achieved in the entire century they've been known for, and isn't likely to happen any time soon. It requires graduate-level education in mathematics just to understand them; writing them out in any lower educational institution would be wholly pointless.

Then there's the big sigma (∑), the summation symbol. Nothing says smart like a big ol' sigma. There's also big pi (Π) notation (the symbol for a multiplicative version of the big sigma).

Trigonometric relations and the Pythagorean theorem are also popular, but don't ask to see words like "sine", "cosine", and "tangent".

If there's a shape diagram, it will usually be an Isosceles right triangle.

Furthermore, there're only two mathematical mistakes anyone ever makes, no matter how advanced their knowledge of the field; they either "misplaced the decimal point" or "forgot to carry the one". (Sign errors,

which are more common, are conveniently absent.)

Math isn't the only subject that gets this treatment. Blackboards full of chemical formulae, sentence diagrams or plot/theme/character diagrams that stretch all over the whiteboard, or genealogies and timelines that look like a tangle of yarn are less common, but serve the same purpose.

This happens for three reasons: First, to ensure that there is some teaching going on, as the show itself thankfully never needs to show the actual classes. Second, to scare the young viewers into believing that they're going to see this stuff when they get older. Third, as a way of showing someone is really smart, often combining it with Room Full of Crazy.

Compare/contrast to Formula for the Unformulable, when characters try to calculate the incalculable and use visually similar equations. Compare Calculus Is Arcane Knowledge, for another trope regarding writers appearing intimidated by math.

See also Technobabble. If you were looking for the regular MC Hammer, go here.

Sean made up an equation for Halloween trick-or-treating: T = H + C^2, where T is treats, H is houses, and C is costumes, with the exponent 2 being good ones.

Sean made up an equation for Halloween trick-or-treating: T = H + C^2, where T is treats, H is houses, and C is costumes, with the exponent 2 being good ones.