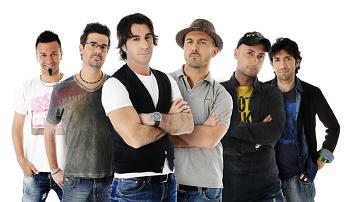 "Attention - in this program, the kind of comedy we're proposing is irreverent, with an explicit and common language full of swear words and vulgarity in general. If you're sensitive to this kind of stuff, then you're asked to avoid listening to it as a whole."
Disclaimer (paraphrased) by cast member Petosauro at the beginning of each episode

Alternatively known as "The Zoo!" or "Lo Zoo", "Lo Zoo Di 105" (literally, "The Zoo Of 105 [Radio]") is an Italian sketch comedy radio program, that can be best described as "about as much Refuge in Audacity as possible". Which of course is part of its charm among its fanbase.

It all started back in 1999, when DJ Marco Mazzoli was working with his colleague, Gilberto "Gibba" Penza, at New York City for the 105 N.Y. radio show, thus giving birth to what would later become one of the most popular radio shows in Italy ever. One year later, the show was canceled due to the excessive vulgarity, only to be uncanceled shortly after. During the following years, a lot of DJs were introduced, but not much of the supporting cast really seemed to stick aside from Mazzoli, Gibba and the notoriously controversial/divisive parody singer Leone Di Lernia. Then, after causing two more controversies - namely, a joke about torturing animals and an accidentally aired blasphemy - the show got canceled twice again for these respective reasons, but each time it got uncanceled and resumed broadcasting (once from a studio located in Miami, for those curious).

At the end of 2010, three members of the supporting cast abandoned the show for good and started working for one of the main radio stations in Italy, Radio Deejay (easily the best-known in Italy, which is why long-time fans of the show saw this as the ultimate selling-out, if not a full-fledged Face–Heel Turn). This Channel Hop made the show's fandom fear the worst... until it was announced that famous comedian Marcello Macchia,

better known by his "Maccio Capatonda" moniker, would join the show's crew alongside his fellows. Considering Macchia's own reputation in Italy as one of the funniest - if not Mind Screw-y - comedians in the country, his recruitment in the show has been perceived as, say, the equivalent of Monty Python joining Whose Line Is It Anyway? if some of the latter's hosts happened to drop the show for some reason. In other words, as you might have guessed, the fandom rejoiced. To this day, the show's doing fine (and even got a Live-Action Adaptation shown on Comedy Central) and it's not going to stop anytime soon... hopefully.

Its current timeslot is between 2:00 PM and 4:00 PM, Italian timezone.

The Other Wiki has a brief article on the show.

Tropes present in the show as a whole: