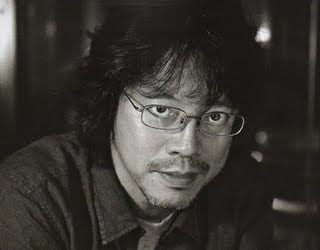 Naoki Urasawa (born January 2, 1960) is a critically acclaimed mangaka, noted for psychological storytelling and well-rounded characters which defy and subvert many anime and manga tropes. Writes extremely good suspense, but is not solely limited to the thriller genre. Excellent, detailed artwork, notable for Casts of Snowflakes (within a single manga, at any rate, as he is also one of the most prolific users of the Reused Character Design concept since his idol, Osamu Tezuka). Also has an affinity for Jigsaw Puzzle Plots, often introducing new characters and plot points long before revealing their significance. And big noses.

He also collaborated with Takashi Nagasaki, who he first met when the latter was made editor for his debut. Ironically, despite these collaborations, they apparently don't socialize much outside of work.

He is also notable for being a musician (with two albums currently released), and being the host of the documentary series ''Manben'' where he and a crew film a mangaka's workspace for a few days, exploring the day to day grind of the mangaka lifestyle, the peculiarities of the given artist's workspace and workflow, an overview of the mangaka's earlier life and their inspirations for taking up art, etc.