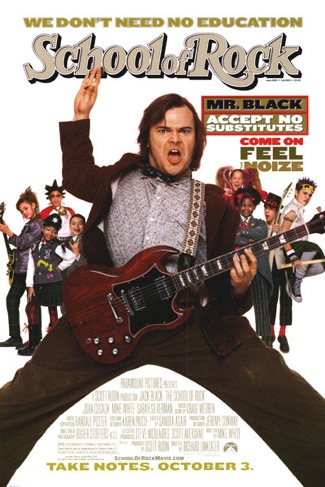 "I pledge allegiance to the band of Mr. Schneebly..."
Patty: Ned has the most important job there is.
Dewey: Temping?
Ned: Dewey, a substitute teacher is not a temp!
Dewey: He's a babysitter!
Ned: Oh, yeah, you think it's so easy? Well, I'd like to see you try. You wouldn't last one day.
Advertisement:

School of Rock is a 2003 comedy directed by Richard Linklater (an icon of the American independent film scene going more mainstream) and starring Jack Black and Joan Cusack.

Dewey Finn (Black) is a rock musician whose Control Freak tendencies, among other things, get him kicked out of the band he founded. After some time of doing nothing, it becomes apparent that he had better find another job to pay the rent.

As it happens, an elite private school in the area has an opening for a long-term substitute teacher. Receiving a phone call intended for his apartment roommate, Ned Schneebly (Mike White), Dewey fakes his roommate's identity and gets hired. He takes the job initially planning to do as little as possible, but soon discovers that the kids have musical talent. After that, he changes his plans drastically, turning the class entirely into a music class about the history of rock, and preparing his kids to enter a Battle Of The Bands contest and beat his old band.

The film received rave reviews from critics and the public alike, and is still one of Black's most well known roles to this day. In fact, Jack Black is on the record as saying the role is his favorite of his career, as well as the closest to his actual personality.

A television series based on the film premiered on Nickelodeon in 2016, despite the original film not being very kid-friendly. There is also a Broadway musical adaptation that opened in the fall of 2015.

Tropes Used in the Film:

Dewey: God of Rock, thank you for this chance to kick ass. We are your humble servants. Please give us the power to blow people's minds with our high-voltage rock. In your name we pray. Amen.
Kids: Amen.

Tropes For the Stage Play

Example of:
Blaming "The Man"