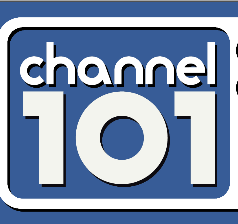 is a monthly screening, created by Dan Harmon and Rob Schrab, where comedic short films that can be submitted by anyone continue as a television-style series if audience response is favorable enough. You can watch/download shows and learn how to make and submit your own.

Roughly every month, a screening for Channel 101 occurs at the Downtown Independent theater in Los Angeles and 92YTribeca in New York (although the episodes can be downloaded from the website, so it still counts as Web Original), with (usually) ten shorts being screened. At the screening, the audience votes on which shows they would like to see return. The top five shows are entered into the prime time slots on the Channel 101 website, and get to make a follow-up episode for the next screening. This process continues with new "episodes" being shown at each screening until one fails to make the top five, at which point the series is cancelled.

Some successful shows also can choose to be voluntarily be cancelled, (The first to do so being Timebelt), making one last unvoted episode. Shows that fail to make the prime time spot are known as failed pilots. An added benefit of having a prime time series is that prime time directors are part of the panel that decides which five new pilots will be shown alongside the five established shows from the previous screening.

Shows that fail to make the screenings are known as rejected pilots. Each calendar year of the festival is referred to as a "season", comprising of 10 screenings, due to there being no December screening, plus month break "to allow the creators to rest" between spring/summer and the November screening, which is the yearly awards show (The Incredibly Prestigious Achievement Award or Channy, so named as a parody of Emmy).

Acceptable.TV, which ran for 8 episodes in the Spring of 2007 on VH1, was created by the Channel 101 team and starred it's most prolific contributors, and was basically the same concept except as a TV show, and with all the shorts, bar one user contribution each week, being done by the production team, and a short's budget was usually better then the average Channel 101 short. Viewers could call-in to vote for two of the five shorts each week to continue. The Channel's creators have gone on to create the shows Community on NBC and The Sarah Silverman Program on Comedy Central (with cameos from several contributors, either in person or In Name Only).

The festival now has two chapters, the original based in LA and the New York based chapter, Channel 101:NY. Channel 101 NY screens at 92YTribeca.

Has a fan Tumblr here.

Some 101ers also did the trolling Halo Minute videos.