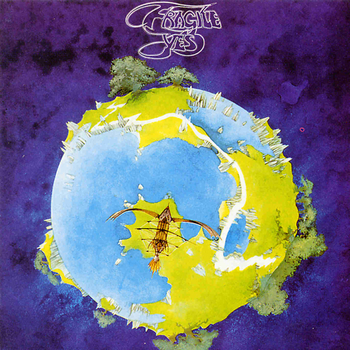 "In and around the lake, mountains come out of the sky, and they stand there."
"I'll be the roundabout
The words will make you out-and-out
I spend the day your way
Call it morning driving through the sound and in and out the valley."
—"Roundabout"
Advertisement:

Fragile is the fourth studio album by Yes, released on 26 November 1971. It was the first album in which former David Bowie collaborator Rick Wakeman contributed to the keyboards after replacing Tony Kaye (who would in turn become a live player for Bowie), and also the first with the album cover art by illustrator Roger Dean. It was a critical and commercial success, having been certified double platinum by the RIAA.

The track "Roundabout" was released as a single on 4 January 1972 in the United States, where it reached #13 in the Billboard Hot 100, and has since been one of the band's most iconic songs.

Not to be mistaken for Nine Inch Nails album The Fragile

Did we really trope to one hundred: