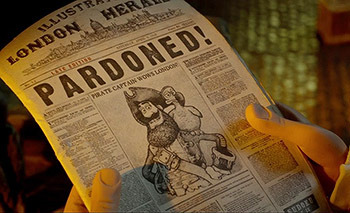 "Power is when we have every justification to kill, and we don't. ... That's what the emperors had. A man stole something. He's brought in before the emperor, he throws himself down on the floor, he begs for mercy. He knows he's going to die. And the emperor pardons him. This worthless man, he lets him go. That's power, Amon. That is power."
— Oskar Schindler, Schindler's List
Advertisement:

A pardon is a legal practice, whereby a criminal's offenses are legally blotted out, or a conviction is erased. Normally this can be issued only by the highest-ranking authorities around — the emperor, the king, the president.

Fictionally the overwhelming use of them is to allow the Lovable Rogue (or, less often, a less charismatic villain) to get off the hook by doing the kingdom a great favor: the bandits who protect the prince who had to flee invaders, the Gentleman Thief who prevents a murder in a household he is robbing, the pickpocket who reveals that the Evil Sorcerer had an Artifact of Doom, or other criminals who for once put their talents to good use. This can either lead to a Happy Ending — even if they can not bear to give up In Harm's Way, they can often be recruited to work for the good guys, which may indeed be a condition of the pardon — or last until they break the law again in a series. In the later case, it often acts much like a Mercy Lead.

The Sympathetic Inspector Antagonist may actually catch his prey once or twice, only to be stymied by this.

Historical Fiction, or a Feudal Future, may use an ancient tradition of pardoning some, or all, criminals on special occasions, such as the ascension of a new king, or to dramatize the clemency of the king. Such a general pardon can also feature after the Witch Hunt, or when the Reign of Terror lurches into a Full-Circle Revolution, while everyone has lost the fervor and is feeling ashamed of the bloodshed.

Corrupt or evil authorities may use it for full blown villains, keeping them in the story.

Super-Trope of Last-Minute Reprieve. The Boxed Crook is often offered one, as are criminals Trading Bars for Stripes. Whether it's for real is another matter. Can be used as a "Get Out of Jail Free" Card; the pardon may be conditional on their joining a team. Compare Statute of Limitations, where the criminal is off the hook after sufficient time has elapsed.

Too many Real Life examples to list them all — include only notably striking cases. The Other Wiki has more here