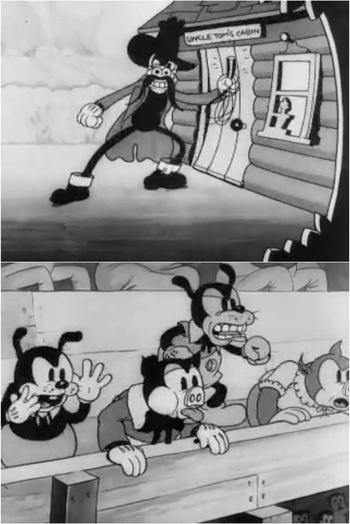 The In-Universe reception of Simon Legree.note Played by Horace Horsecollar, a friend of Mickey Mouse.
Advertisement:

A Hate Sink is a character who is introduced to the story only so that the audience can hate them. This character is intentionally made to be vile and unsympathetic by the creator.

The key differences between this trope and The Scrappy are:

Note that while the two tropes can overlap, in order for a Hate Sink to be considered a Scrappy, they have to be hated for different reasons than the author intended. Example Bendy from the Foster's Home for Imaginary Friends episode "Everyone Knows It's Bendy" was deliberately written to be despised for breaking the rules of the Foster home and framing other imaginary friends in the house for the rule-breaking. However, because he became a Karma Houdini at the end of the episode, he got more hate than was intended. As a result, the episode actually got so much backlash that its writer, Lauren Faust, eventually apologized for it, and Bendy was not featured in any more episodes.

Compare with Complete Monster, which is about Audience Reactions to how vile someone can get; Love to Hate, when the viewers actually enjoy this character because of how effective they are at being hatable; The Heavy, which is about the impact for the story; Jerkass, who may be unlikable, but stays above the Moral Event Horizon; and Villainy-Free Villain, an antagonist who does nothing evil, but has an unpleasant personality to make up for it. Contrast with Anti-Villain, when a villain has sympathetic traits; and Laughably Evil, when a villain is funny and thus entertaining (though in some cases a villain can be both sympathetic and funny).

If all of the work's other characters hate this individual instead of the work's audience, then they are instead Hated by All, although the two tropes can and frequently do overlap — a character being Hated By All is often a good indication that the audience is supposed to hate them as well.

"That Guy" is basically every negative attribute of every different type of roleplayer rolled into a single obnoxious person.

"That Guy" is basically every negative attribute of every different type of roleplayer rolled into a single obnoxious person.