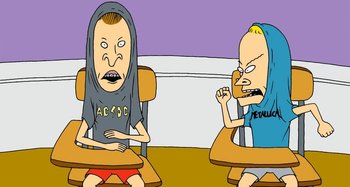 Two moronic jackasses for the price of one.
In fiction, sometimes there's an inverse relationship between intelligence and politeness. This is not one of those cases.
Advertisement:

The Insufferable Imbecile is seen among the lowest of the low of stereotypes. Rude, obnoxious, and limited in intelligence among other things, these are the people who seldom get anywhere in life, but when they do, well, there can be problems. Unlike the Innocently Insensitive, these people are too prideful to accept that they've said or done anything wrong, and/or cling to whatever falsehood they hold as fact. They are exceptionally proud of their ignorance, as well as their (often myriad) conflicts with others, and will view any sort of burned bridge or ruined opportunity as an acceptable loss for "standing up for themselves" or "not taking anyone's shit". Darker examples are very likely extremely violent and aggressive and take similarly great pride in the number of fights they've been in and/or the injuries they've inflicted on others, and are great at finding excuses to justify these acts. Typically the only thing keeping this character from being The Scrappy is the fact that their stupidity makes them too funny to be legitimately detestable, or they're such awful people that watching them face the consequences of their actions is a reliable source of amusement. The most common archetype for this kind of character, at least in more comedic settings, is that of the schemer.

This is a common negative stereotype of Americans. In a Slobs Versus Snobs plot where the Snobs are portrayed sympathetically, the Slobs are usually The Boor. Alternately, the Snobs can be on this site when the Upper-Class Twit trope comes into play.

See also Lower-Class Lout, Dumb Jock, and Dumb Muscle, which these may include. A Know-Nothing Know-It-All can be pretty annoying but isn't always this bad. Will be frequently seen amongst the foremost types of the Anti-Role Model. In extreme cases, if the Insufferable Imbecile is a villain, they may be Stupid Evil. May also be a Trumplica, for the aforementioned reason of this being a negative stereotype of Americans.note This is still not an excuse to include Real Life examples. There is a fair chance that this kind of character Hates Reading.

Compare and contrast Stupid Evil. Contrast Kindhearted Simpleton, Good Is Dumb (including Dumb Is Good), Good Is Not Dumb, Evil Genius, and Insufferable Genius note God help us all if someone pits an Insufferable Genius with Insufferable Imbecile . See Enraged by Idiocy for other people's reactions to them. See also Karmic Buttmonkey for the consequences of being this trope.

Polar opposite trope to Gentleman and a Scholar.

Truth in Television, obviously, but No Real Life Examples, Please!

Andy thinks that the 1931 Dracula movie was the only good Dracula film because it was the only film he has seen and he has only seen the still shots.

Andy thinks that the 1931 Dracula movie was the only good Dracula film because it was the only film he has seen and he has only seen the still shots.