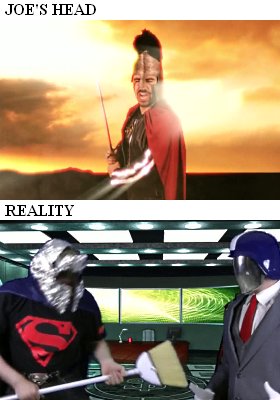 "Jesus Christ, Joe. You've been playing way too much Skyrim, haven't you?"
Abed: By the power vested in my, I declare you ... cancelled.
Jeff: Oh good, Abed, cancel us! And while you're at it, why don't you take your cutesy "I can't tell life from TV" gimmick with you! It’s very Season 1.
Abed: I can tell TV from life, Jeff. TV makes sense. It has structure, logic, rules. And likeable leading men. In life we have this. We have you.
— Community, "Anthropology 101"
Advertisement:

Okay, so you start to be unable to tell the difference between fiction and reality. Often you will think a TV show is real, or believe you are actually in the show. You could be a Loony Fan who hallucinates things, a very small child who merely believes whatever they are told, or maybe a big Manchild. You might just lack the ability to understand that fiction is merely fiction, and naively apply it to real life without necessarily imagining anything and/or being eccentric and still happily unaware of what they're seeing or doing in hindsight.

This trope can either be Played for Laughs or Played for Drama. The dramatic versions can often come with a moral about not watching too many shows or not thinking stuff in shows is safe to do.

When the "reality" of the work is acknowledged in-universe, see This Is Reality.

Needless to say, this is indeed Truth in Television for some people, often for various reasons. For the sake of not accidentally offending anyone though, we won't be talking about that.