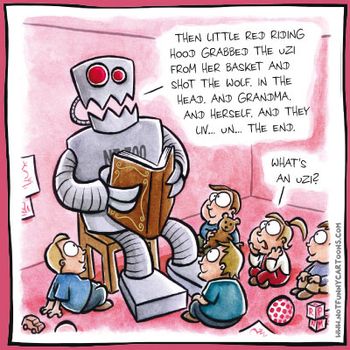 He also likes to iron and do the hoovering.
Advertisement:

Nichtlustig (a.k.a. Notfunny) is a gag-per-day format comic series by German comic-strip artist Joscha Sauer. According to himself, it was something he did to pass the time, while looking for a real job. That was in 2000. He seems to have quit his search.

So what's it all about? Let's see: Clowns chopping off their legs for no reason, lemmings finding creative ways to commit suicide (or stalking Death), Yetis melting their caves in the course of baking gingerbread... You get the idea.

There exists a German

as well as an English

version of this strip series, which seems to have been taken down and is now only available on archive.org. Nichtlustig started as a Webcomic, but to date the cartoons have also been published as comic strips and (with some exclusive material) as a 5-volume book series.

Not to be confused with Dude, Not Funny!.

Tropes in the Nichtlustig cartoons: