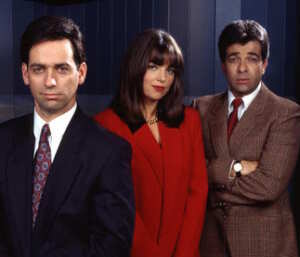 Mike, Brooke & Marty
"Mike has the network's one hundred percent support right up to the day we sack him."
Brian Thompson (Frontline Executive Producer)
Advertisement:

Frontline (Better known as Breaking News in the USA) is a satirical Australian sitcom that looks at the unscrupulous manipulation that goes on in the high-pressure world of current affairs T.V journalism. It ran for three seasons from 1994 to 1997. (Coincidentally, Frontline is also the title of a long-running American documentary series on PBS.) It was created by the team that would later become known as Working Dog Productions.

Just like any other current affairs programme on commercial television, Frontline has its share of sensationalism, controversy, and cynical manipulation of the truth. It combined actual current events such as the First Gulf War with a funny and thought-provoking analysis of topics such as how the media treats people and events and how people are stereotyped.

All in the pursuit of ratings.

Not to be confused with the aforementioned PBS news program - the show is called "Behind the Frontline" when broadcast in North America for this reason. Also not to be confused with a different series called Breaking News that aired in 2002 on Bravo, nor with a flea treatment for cats and dogs.