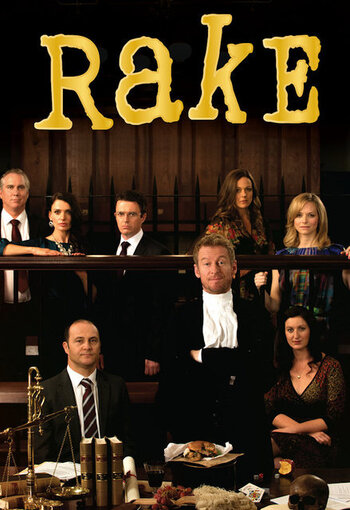 An Australian comedy series beginning in 2010 about the antics of an irascible, hedonistic, self-destructive lawyer operating in central Sydney - Mr. Cleaver Greene, portrayed by Richard Roxburgh.

Rake is a black comedy set within the justice system of New South Wales and its capital, Sydney. Each episode revolves around peculiar or well-publicized court cases that grab Cleaver's attention. In addition to his rebellion against the justice system, there are ongoing subplots about his relationship with ex-prostitute "Missy", his ongoing battle against the Australian Tax Office, his gambling debts to dubious underworld gangsters, and the dissolving relationship between Barney and Scarlet - his fellow lawyers and best friends from university.

The series is noted for its well-written episodes (they manage to avoid most of the legal jargon seen in other court shows), and strong acting (with plenty of guest stars every episode).

In January 2014, a US remake starring Greg Kinnear began airing on the Fox network, but only lasted one season.