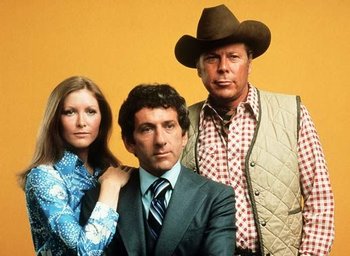 Petrocelli is a legal drama that aired on NBC from 1974 to 1976. It was the only drama series from Miller/Milkis Productions, who co-produced the series with Paramount Television. It was co-created by Harold Buchman and Sidney J. Furie, developed by E. Jack Neuman and Thomas L. Miller and Edward Milkis were the Executive Producers, with Leonard Katzman as the line producer.

The character of lawyer Anthony J. Petrocelli debuted in the 1970 theatrical film, The Lawyer, written by Neuman and directed by Furie. Barry Newman played the titular character, a Boston lawyer who relocates to the small Arizona town of San Remo. In the movie, Tony is hired to defend a doctor (Robert Colbert) accused of killing his wife in a story loosely based on the legendary Sam Sheppard case. Diana Muldaur played Petrocelli's wife, who was named Ruth.

Four years later, the Petrocelli character was revived for a TV-movie, Night Games, in which the lawyer is hired to defend a socialite (Stefanie Powers) accused of killing her husband. In this film, Petrocelli's wife is now named Maggie, and is portrayed by Susan Howard. He also gets a legman, a former Sheriff's deputy named Pete Toley (Albert Salmi).

The respectable ratings for the TV movie led to a series that debuted in the Fall of 1974, with Newman, Howard and Salmi reprising their roles for the series, though Pete's last name was changed to Ritter.

The fictional town of San Remo just may have been the Murder Capitol of Arizona, judging by this series, as Tony has no shortage of accused killers to defend, and he does so with style. The series had a number of 'trademarks' that were distinguishing. Viewers can count on at least one of these in every episode:

The series continued on to a second season, but at some point in that season, Tony Petrocelli goes from being a lawyer to being an Action Hero, becoming involved not necessarily in cases, but stories of intrigue. After a couple of episodes in that vein, Tony goes back to the business of defending clients, but it was too little, too late, and the series was not renewed for a third season.

The series ran sometime later in the United Kingdom and Europe and developed a cult following there.

With the court's permission, I'd like to take you back to these tropes: