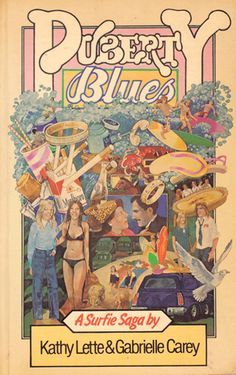 Puberty Blues is a 1979 novel by Gabrielle Carey and Kathy Lette. It was adapted into film in 1981 by Bruce Beresford and was made into a tv series in 2012.

The novel and film focus on the two main characters, teenagers Debbie Vickers and Sue Knight, as they try and get in with the 'cool crowd', the Green Hills gang. Leader of the pack is Cheryl Hayes, who makes Debbie and Sue jump through a few hoops before she accepts them. Her and the rest of the Girl Posse hang around Cronulla beach waiting for their boyfriends to emerge from the water and bring them food when asked.

Oh, and be available for sex.

The television series expands more to focus on the adults. The Vickers trying to reconnect as a couple, the Knights considering leaving the area for good and the Henneseys falling apart due to an affair.

The series ran for two seasons.