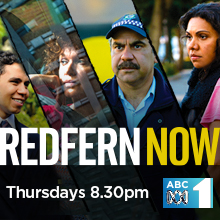 Redfern Now is a popular Australian series which focuses on everyday trials that many of us from all walks of life can relate to, including broken families, teenage rebellion, and mental illness. However, it commits to realism over soapboxing or melodrama.

It paints an emotional and heartfelt picture of the inner-city struggles of the suburb of Redfern's working-class Australian Aborigines.

Each episode focuses on a different family. It premiered on The ABC in November 2012, with ratings close to Home and Away. A second season will air in 2013.