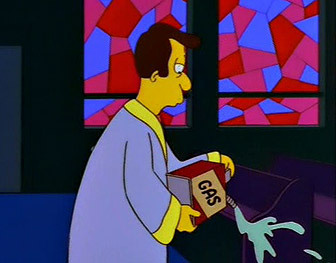 He's a very dedicated Christian.
Lucideus: Have you been hurting your fellow mortals?
Priest: Oh, certainly not. All that we do is for their own good.
[beat]
Lucideus: Let me ask this way: Are you setting people on fire?
Priest: On fire for God!
Lucideus: I think we need to talk about this.
— True Magic
Advertisement:

Religion is often associated with virtue, for various reasons including the incentives the former is often perceived to have for the latter, that religion plays a role in defining morality for societies and the belief that virtuous minds accept religion in the first place.

In turn, this also creates an incentive, in a character who wants to be seen as more virtuous than they really are, for hiding behind religion.

Not to be confused with The Fundamentalist, who really does believe in said religious ideas, though to a fanatical degree; hiding behind religion implies some level of insincerity.

Lastly, not to be confused with Apocalypse Cult or Religion of Evil. In those circumstances, one would be trying to hide the fact that they're an advocate/follower of such an organisation.

The leader of a Scam Religion is a good example, although in that case, the entire religion is a fake designed to con his followers or outsiders.

A Sub-Trope of Hypocrite, and likely to be Holier Than Thou. A religion where this mindset is the norm rather than the exception for many of the clergy is most likely a Corrupt Church. See also Light Is Not Good, which can be this on a more fantastical level. Closely related to Churchgoing Villain, but that kind of person usually considers themselves genuinely religious despite their actions, rather than using it as a cover.

Sincere members of the religion (or those simply educated in the tenets of other faiths) may invoke the No True Scotsman trope when people like this are mentioned (i.e.: "No true Christian would torture nonbelievers, no true follower of Islam would kill fellow Muslims, etc.).

Note: To correctly identify who may be doing this fallacy in Real Life relies on an understanding of the religion in question and irrefutable proof of personal motives. A lack of either results in heated arguments. As such, No Real Life Examples, Please!