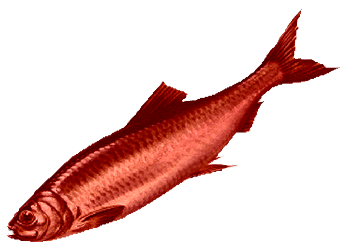 As you might've guessed, this
picture is only here to distract you.
"The chief difference between the exceptionally knotty problem facing the detective of fiction and that facing the real detective is that in the former there is usually a paucity of clues, and in the latter altogether too many."
— Dashiell Hammett
Advertisement:

A clue that leads in the wrong direction.

A red herring is a good red herring when it interweaves itself into the story's events. For example, the murder victim may have been a philanderer. His wife has no alibi. Aha! It was the wife!

The wife's lack of an alibi is a red herring. It turns out the wife was shtupping somebody else at the time and didn't want to provide that information. However, the deceased husband's philandering is what got him killed, as it turns out, by his girlfriend's jealous husband. Philandering as a motive is introduced for good cause, not just to set up suspicions about the wife's lack of an alibi.

This trope is often coupled with Never the Obvious Suspect, where the obvious suspect is used as a red herring, and the real culprit turns out to be someone unexpected.

Subject to being Spoiled by the Format: if they've just found a plausible suspect, but there's 180 more pages to go, well...

Has nothing to do With This Herring.

Warning: Due to the nature of this trope, unmarked spoilers ahead!