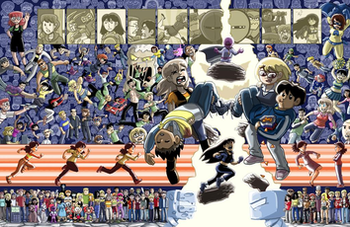 The Walkyverse is the setting of four webcomic series by David Willis:

Outside the Walkyverse is the Dumbiverse, containing only Dumbing of Age

(page here), an Ultimate Universe Alternate Continuity combining characters and elements from all four (but none of the science fiction elements so far).

The Walkyverse also includes (de facto at any rate) a number of other comics largely written by friends of Willis, including (but not necessarily limited to) Melonpool, Fans!, Something*Positive, Queen of Wands, Girls with Slingshots, All New Issues, Multiplex, Questionable Content, Diesel Sweeties, Penny and Aggie, and Scary Go Round.

The Walkyverse officially ended with the final Shortpacked! strip on January 17, 2015, and the final strips of Joyce and Walky! were uploaded on May 17, 2015. A series about Joyce and Walky's pregnancy, It's Pregnancy!

Tropes that apply to the Walkyverse as a whole: