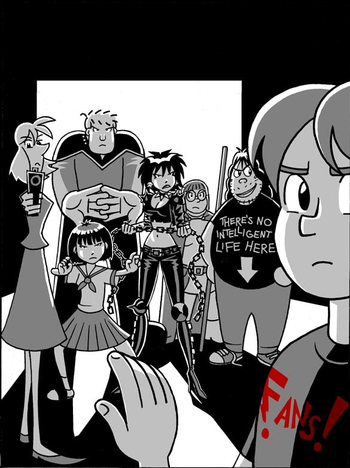 is a webcomic written by T Campbell and drawn by numerous artists but primarily Jason Waltrip, about the members of a Science Fiction fanclub who battle various monsters, mad scientists, aliens, and time travellers. They were partially opposed by the Fantasmagoric Integration Board (F.I.B), a top secret group of Men in Black led by the charming but manipulative Desmond Jones, who policed the far-out and even fictional threats the club came up against. Ran from 2000 to 2005, and gently parodied the obsessions of genre fans whilst at the same time celebrating them. At its best, it was even epic.
Advertisement:

In February 2008, Campbell and Waltrip revived Fans! The story picks up in January 2008, when half the original cast are working for the government, and recruit a new roster alongside to fight alongside them. In December 2011, Campbell announced that he'd be ending it again sometime in 2012, but unlike Penny and Aggie, keeping his options for a third run open.

The new characters introduced for the revival: