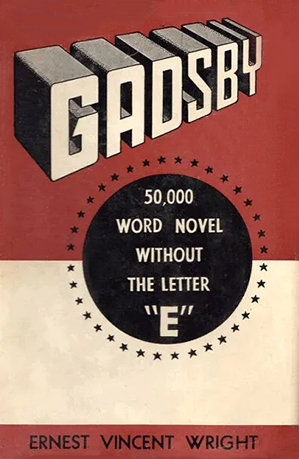 This is when an author writes in an atypical pattern. The reasons for this can vary, from Leaning on the Fourth Wall (if it's related to the story in some way), to keeping certain plot points and twists hidden to the very end (e.g. avoiding gender pronouns for a Samus Is a Girl twist; see The All-Concealing "I") to simply being a stylistic choice. Some types of self-imposed challenges include writing in a particular metre, or making each line a letter longer than the one that preceded it; writing in code (e.g. replacing words with ones that appear a few places afterwards in the dictionary); avoiding certain common letters (the correct term for this is a lipogram, by the way; E is the most commonly used because it's the most commonly used vowel in several languages); using words that display some sort of complex pattern (e.g. making large chunks of the story alliterative or in palindromes); drabbles (stories of precisely 100 words) and many more.

Remember this applies to any challenge imposed on the author by themselves, so normal deadlines and schedules don't count, though improvising with limited resources or using a particularly strict time limit does (see NaNoWriMo for one example).

The alternative name "Oulipo" is from a group of French writers

who were dedicated to this style of writing. The Other Wiki also has an article on the concept.

Some authors might adopt this as a Signature Style. Unconventional Formatting can be related. When this is used within an otherwise normal piece of writing to show something specific then it is Painting the Medium. Flash Fiction is a subtrope.