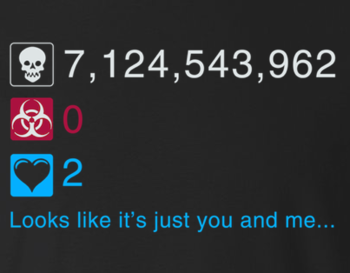 Too bad science means you’ll both die.
Kyon: Do I have to live in this gray world all alone with her?
Itsuki: Adam and Eve. If you reproduce enough, it'll work out?
Kyon: I'll smack you.
— The Melancholy of Haruhi Suzumiya
Advertisement:

This is a plot where the remainders of a group, especially an entire race, must be protected from extinction. Occasionally, the final two actually do perish, but not before producing offspring who repopulate the species.

This, of course, ignores real population genetics, where a certain minimum number of genetically divergent (i.e. unrelated) individuals are needed in a gene pool to maintain a healthy genetic diversity over the generations. For humans it is an estimated 497 individuals (no joke) although 1,000+ is to be preferred. The general rule of thumb is the "50/500" guideline — that a population founded by 50 genetically diverse humans in isolation would last about 2,000 years before inbreeding did them in, while 500 or more stand a chance of lasting indefinitely so long as all of them reproduce and no major disasters wipe out a significant part of the gene pool during that time (although as with everything else involving genetics, this is a gross oversimplification and varies greatly with the conditions encountered).

Needless to say, you won't find this in direct siblings. More casually, this results in the unspoken implication that said newly propagated species does not have a problem with incest. This rarely comes up.

In particularly heavy-handed scenarios, the two survivors who rebirth their species will actually be named "Adam" and "Eve", or some fairly obvious variations on those names. This is sometimes called a Shaggy God Story.

Literary note: the "Adam and Eve" plot is mentioned (in a bad way) in many articles and books on writing science fiction stories. Apparently it was, for many years, one of the most over-used twist endings in the badly written stories that make up the editors' mountainous "slush pile" of wasted efforts - in fact, many editors would reject stories with this twist on sight.

Usually found coupled with a New Eden in an allusion to the Garden of Eden; if some manner of vehicle or protective capsule is employed, this becomes an Ark or a City in a Bottle. Often the end result of Earth All Along. May overlap with Ancient Astronauts and/or lead to Advanced Ancient Humans. Related to Last of His Kind. Sister trope of Only You Can Repopulate My Race. Not to be confused with Coitus Ensues.

While not necesarily a Discredited Trope yet, it is noted in modern times for having a Squick connotation to it not only due to the incestuous issues, but to the fact that many stories historically have had the Adam and Eve characters as not yet legal adults by modern standardsnote the biblical Adam and Eve were probably intended to be around the age of 13 or 14, being around the minimum human age of biological development capable of conception, the general presumption being that they will figure certain biological things out for themselves very early and "just go with it".

See also Babies Ever After.