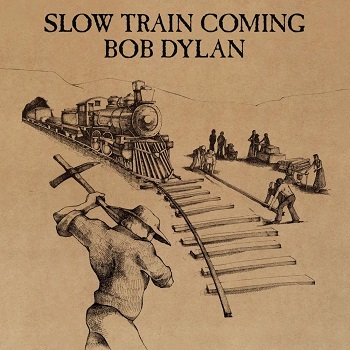 There's a slow, slow train comin' up around the bend.
Advertisement:

Slow Train Coming is the nineteenth studio album by Bob Dylan, released in 1979. At the time it was his first album after becoming an born-again Christian and this is reflected on this and many other albums he released in The '80s. Musically he shifted more towards Christian Rock and Gospel Music and his lyrics dealt more with his faith in God. While Dylan did reach a new audience among religious people, it did alienate a lot of his older fans, especially considering Dylan wrote far more critical songs about religion earlier in his career, notably "With God On Our Side" from The Times They Are A-Changin'.

Commercially the album did well. "Gotta Serve Somebody" was his first huge hit in three years and won him his first Grammy Award ("Best Rock Vocal"). Critical reactions were more mixed, though with the passing of time and especially regarding Dylan's entire career it's nowadays Vindicated by History as one of his better albums (or at the least superior to his other two Christian albums).