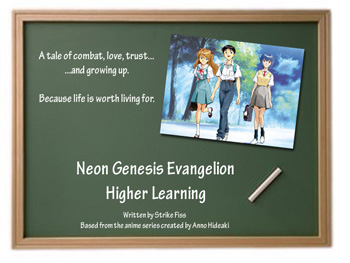 Fanfiction by Strike Fiss
It is at that moment, where I know there is a chance. A chance that I may have done my job. Just maybe I did it right. And just maybe, Shinji Ikari will not have to do the same thing I just did.
Advertisement:

A new teacher called Kaoru Miyazaki starts to work in Shinji, Asuka and Rei’s school. His lessons and advice motivate the Children to look at things differently and consider other possibilities, and help them to mature and be slightly readier to face their future trials. At the same time, someone is influencing Gendo’s scenario in little ways, making subtle changes. And Gendo is determined to find out who it is and put a stop to that person’s interference.

Higher Learning is one of the classics of Evangelion fanfiction, and one of the first Peggy Sue Eva fics.

- can be found here

Check Advice and Trust, The Child of Love, Evangelion 303, The Ikaris, The One I Love Is..., Neon Genesis Evangelion: Genocide, Ghosts of Evangelion, The Second Try or Children of an Elder God to see other Eva AU fics.

Needless to say, it has nothing to do with the Higher Learning film.

open/close all folders
A-C
D-F
G-I
Advertisement:
J-L
M-O
P-R
S-U
V-Z
He stood slowly, and stopped her song by gently cupping her chin with his hand. Asuka looked up, scared at first in the first moment of silence, but then breathed out a long breath she had been holding for both of them.
Both lay down their instruments and stood together, eye to eye. Without another word, they embraced in a timeless, silent kiss.