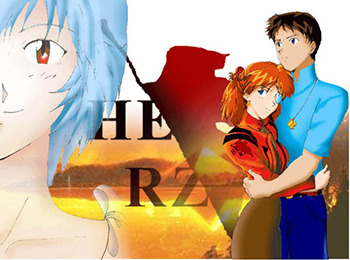 Twelve years have passed. They have rebuilt their lives… but the ghosts of the past still threaten them.
Fanart by Myssa Elaine Rei
"What!? What does Shinji-kun have to do with all this?"
"Everything, Kurumi. Everything."
"How?"
"He is the Alpha and the Omega. The Beginning and the End."
Advertisement:

Twelve years ago Third Impact was averted and SEELE was exposed. NERV has been broken into two agencies, the scientific research agency GEHIRN and the peace-keeping and peace-making anti-Evangelion proliferation organization HERZ, led by Major-General Misato Katsuragi. Shinji, Asuka and Rei are still her subordinates but they seldom pilot Evas. Shinji and Asuka are married and have a daughter, and the cast leads mostly peaceful lives despite the entangled international political situation forcing them to constantly deploy the Evangelions in possession of HERZ.

However their time is ticking off. Not everyone is willing to give up the dreams that the Evangelion technology makes possible. The remnants of SEELE still desire Instrumentality. The resurgent nation-states, now recovered from the devastation of Second Impact, chafe under the yoke of the United Nations. Several superpowers resent HERZ's full control of the Evangelions and are willing to do whatever it takes to build their own, seize the HERZ's Evas or destroy them.

Meanwhile, Major-General Katsuragi, Director of HERZ, has an agenda all her own, and the Children have a plan to claim their lives of Project Eva. And they are determined to carry it out.

The time is 2027. Has the final hour for mankind come 'round at last?

One of the granddaddies of Evangelion fanfiction, HERZ is a mix of character drama and international intrigue. Everyone feels in-character and a logical extension of their canon selves at the time of End of Evangelion. The politics of the story are a real draw, presenting a colourful global setting where various factions are competing to realize their own vision of the future. The question isn't just "Is Third Impact going to be averted?" but "Even if it's averted, what sort of world will we be living in?"

. It can also be found in these archives: link

open/close all folders
A-C
D-F
G-I
J-L
M-O
P-R
S-U
V-Z
Rei: Are your hearts and minds still set on the plan? [...] There is much danger. You both might die.
Shinji and Asuka: For the hope that Akiko-chan can have the chance to grow up and have her own chance at happiness, it's a risk we must take.