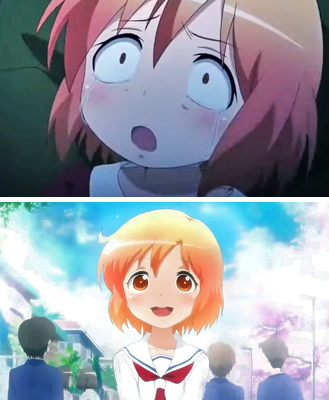 This Broken Bird will fly again.
"This is my family. I found it all on my own. It's little and broken... but still good. Yeah. Still good."
— Stitch, Lilo & Stitch
Advertisement:

The universe isn't kind to The Cutie. For all their sweetness, idealism, love, and innocence, authors put them through all sorts of horrific violence, trauma, and loss. Eventually they are broken inside, an Empty Shell of what they once were. So what happens next?

Sometimes their hopeful, caring nature is forever lost. Sometimes they snap. They may start on a path of darkness, and try to bring the world down with them. Or they may just wither up and die.

Other times, the writer lends them a kinder hand.

The poor thing is lifted out of their hopeless situation, and started on a path to healing. As they recover, they begin to look more alive. They make genuine smiles, recover hope, and start to show their sweet, lovable self once again.

The reasons for this trope are pretty obvious: The Cutie draws the adoration of the audience, and breaking the Cutie triggers their horror and sympathy. So naturally, satiating their caring, sympathetic feelings by patching up the Cutie will especially inspire the audience's affection and satisfaction.

This doesn't always mean that The Cutie will be unchanged. The traumatic experience may have caused them to become wiser or more practical, stronger, more assertive, or even dangerous. But at their core, they are still the sweet, lovable character they once were.

In other words, they are a Cutie again.

Alternatively, a broken character may not have necessarily been a Cutie previously (their past may even be unknown or forgotten), but as they recover they nevertheless start to display sweet, caring, lovable traits. This character could be a jerk, cynic, or downer who becomes more kind, idealistic or cheerful, but they could also be a Blank Slate who has yet to be shown some goodness and hope. Either way, this variation can have a similar satisfying effect on the audience's sympathy: as the character recovers, they exhibit adorable traits that draw affection. In other words, they heal into The Cutie.

The very nature of this trope involves the outcomes of characters' arcs, so expect unmarked spoilers ahead!