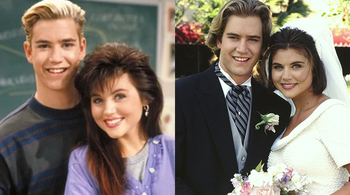 Itoshiki: You could even say that relationships in high school are a preview of love, for when you seriously fall in love!... I think I just said something smart.
Abiru Kobushi: No, not really.
Itoshiki: Oh. Yet high schoolers these days skip the preview and go straight for the real thing!... I think I really said something smart this time.
— Sayonara, Zetsubou-Sensei
Advertisement:

This is when a married couple first met and started dating as teenagers in high school. Some teenagers treat their relationships like the be-all and end-all of the world, and sometimes the author agrees, implying or directly showing that they marry and live Happily Ever After. Fiction writers might do this to avoid addressing the sad fact that the lovely couple making out at the end of a teen romance story would probably break up after high school in the real world, especially if one or both parties go to college. In a darker application of this trope, they might end up Married Too Young.

In a Magical Girl setting, sometimes this is justified by the assertion that they fall in love Because Destiny Says So.

To some extent, this may simply be harkening back to a simpler time, as, prior to the end of World War II, far fewer people went to college, and those who didn't frequently married straight out of high school. This trope is still present today, but is largely limited to more conservative "no sex before marriage" cultures.

Compare also with Childhood Friend Romance, where the couple can also start dating in high school but they've known each other for much longer than that.

John Walker and his wife Olivia reminisce on how they fell in love in high school, and she encourages him as the new Captain America.

John Walker and his wife Olivia reminisce on how they fell in love in high school, and she encourages him as the new Captain America.