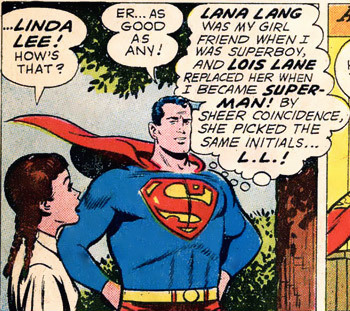 Linda Lee, Lois Lane, Lana Lang, Lex Luthor, Lena Luthor, Lori Lemaris, Lara Lor-Van... There's no escape, Superman.
"I'm Penny Parker. You can remember that 'cause it's got the same letter at the front of each name. That's important theatrically, you know."
— Penny Parker, MacGyver, "Every Time She Smiles"
Advertisement:

In Real Life, an alliterative name is a name in which the first and last names begin with the same sound. In more extreme cases, this can also include the middle name.

Giving a character an alliterative name is one of many ways a writer can make a name more interesting and catchy, which in turn makes the character more memorable to the audience. This is especially important in works with large Ensemble Casts, where extra help is needed to differentiate between them.

In comic books, this is especially true of the names of Super Heroes or their close hangers-on. It was a favorite tool of Stan Lee's, since, swarmed with projects, he often had trouble remembering the characters' names, and the alliteration worked as a mnemonic device. (Though it didn't always work perfectly — Lee occasionally referred to "Peter Palmer" and "Bob Banner".)

Of note to writers: Overusing this trope dilutes its effect, particularly if multiple characters have the same starting letters in their names.

A variation consists of downplaying the alliteration by having a prefix before the surname. Such as "Alice McAllister" or "Bob O'Brien".

In comic books, the Alliterative Name is often also Two First Names. In cartoons, it goes hand-in-hand with Species Surname.

See Alliterative Title, for work titles that do this. Compare Rhyming Names, in which the character's first and last names ends with the same sound. Repetitive Name is a more extreme variant.

Please note that Japanese names, though many may seem alliterative to an English-speaking audience, may not convey the same "alliterative power" in their original setting; syllables (and vowel sounds) matter more than letters in Japanese.

While Truth in Television, Real Life examples are way more common than it is in fiction and hasn't a significant relevance to be added here. On the other hand, real-life examples for Alliterative Families are allowed as it is way less common.

For index / trope names themselves: