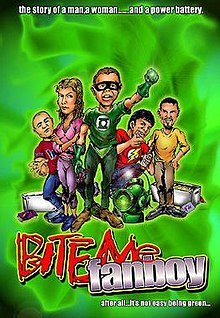 Bite Me, Fanboy is a 2005 movie by filmmaker Mat Nastos. It is a comedic look at the culture of Comic Book fandom.

The movie was produced on a small budget and it took over two months to film on digital video. It is a look into the fandom of comic books by a group of fans. Plus the cast and crew was made up of professionals of the comic book world, such as Shon Bury, Landry Walker and Mat Nastos.

The basic summary is this: A geek named Nick Norton gets dumped. He doesn't understand why. Especially since the incident that caused the dumping wasn't the first time his ex had seen it. Depressed, he heads to his favorite comic book store, and to hopefully get sympathy from his friends.

...He doesn't get that. He gets something else.