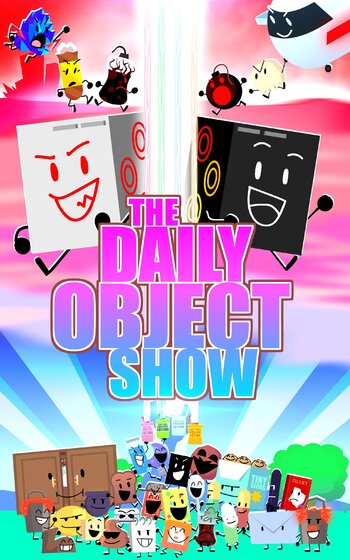 Not on often but when it is, it's daily
Advertisement:

The Daily Object Show (acronym TDOS) is a daily competition show about objects. It's made by FusionAnimations

whose responsible for Object Invasion, one of the well-known object shows in the object show community, and The Adventures Of Steve.

The show is not kidding when it claims to be "daily" in its title. The episodes are released within a day apart from each other, something unheard of for a good quality, non-joke Object Show, although it helps that the episode's runtime averages around 1 to 2 minutes.note Although later seasons easily passed the mark in exchange for not being "daily" anymore

That being said, The Daily Object Show has the run-of-the-mill contest show in which the host, Computer, offers the chance to win the grand prize of really good-smelling lotion to the contestants by partaking in challenges. However, the following seasons change the format completely whether it be genre or even medium. This includes its ever-increasing Rogues Gallery and intriguing storylines.

Enough chitter-chatter and enjoy the current episodes with this playlist

The following tropes as provided:

[Once Water Bottle was declared the winner of TDOS]
Cringe Pill: Water, M'lady. I shall simp for you—
Water Bottle: I have a boyfriend.note The boyfriend in question was supposed to be Lava Bucket according to Fusion though he has yet to acknowledge this in-universe
Cringe Pill: NOOOOOOOO!!!!!