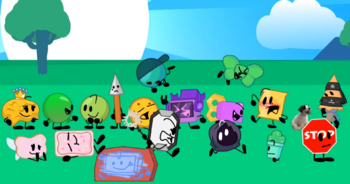 on 27th September 2020. The show follows the object show genre and its standard protocol, only this time it uses Objectsonasnote Definition: An object representing the online persona of an OSC member made by the creator's friends as the contestants. Its slapstick, low-brow humour, frequent usage of swear words and 2D animation combined with GIS Syndrome is what the Object Show Community calls a joke show.

Eighteen objects were minding their own business when suddenly outta nowhere emerged The Burger King, the mascot from a fast-food franchise of the same name. He was apparently summoned to give a lifetime Burger King gift certificate which he then settles by hosting a competition once everyone began fighting tooth and nail over the certificate. Thus began one more contest down the long line of object shows where only one lucky individual can claim the prize of Burger Brawl

Full episodes can be found on the official playlist

Tropes regarding the show are listed down below