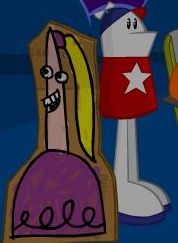 You need a certain character to be involved in some sort of activity. The certain character cannot/doesn't want to/will hurt you if you approach them. So what are you going to do? That's easy: you get a piece of cardboard and draw a crude image of the character on it. Or draw their face on a melon. Or anything like that. Nobody will know the difference.

And in most comedic settings, it works.