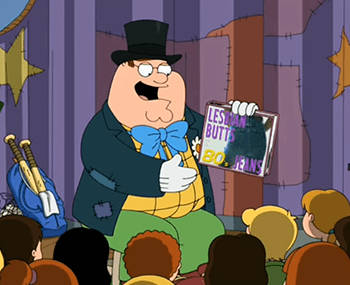 Wholesome, child-friendly content.
"When I'm off the clock, kids can go jump in a lake for all I care."
— Krusty the Clown, host of The Krusty the Clown Show, The Simpsons
Advertisement:

Kids' show hosts. They laugh, they sing, they smile, they bring joy to children all over the world... at least, on the surface. But beneath that shiny, happy façade lies the Depraved Kids' Show Host, a character you would not, under any circumstances, want your children around.

Unlike his zany-go-lucky cousin, who is excitable but pretty nice off-set as well, the Depraved Kids' Show Host is at the very least a Jerkass. When he's on air, he's Mr. Snuggles, happiest figure in Friendlytown. But when the cameras aren't rolling, he (and it's almost always a he) is a sex, drug, and gambling addict who drinks, cavorts, and swears enough to make a sailor blush. He smokes like a tilt, lashes out at techies, and above all, he absolutely hates kids. That, or he likes them a bit too much.

This trope plays on the irony of a jovial character who interacts with children actually being a horrible person. As such, it's related to Monster Clown and other tropes. The worst examples tend to be murderous or even turn into supervillains if left unchecked.

This is especially popular in Real Life Urban Legends, the insinuations of which can ruin someone's career. For some reason, people just can't believe that a right-thinking adult would want to spend his life teaching kids manners and helping them grow as people. Fred Rogers and LeVar Burton would respectfully disagree; this is generally not Truth in Television. On the other hand, they wanted to be kids TV presenters — many others only do it as a way into TV, and, as former kids TV presenter Dara Ó Briain attests, "those people are the most ambitious bunch of pricks you will ever meet." And he's a stand-up comic!

See also Nice Character, Mean Actor; Villain with Good Publicity. He may also Hates the Job, Loves the Limelight. Contrast with "Contractual Purity", if the character in question is being restricted into living a wholesomely clean life by his employment contract. (In fact, a severe enough contract might end up creating a Depraved Kids' Show Host, when they get frustrated from being barred from acts that many normal adults are permitted to engage in). May exist in a Subverted Kids' Show, but most often they're villains in regular shows. Surprisingly, not related to the Depraved Homosexual or Depraved Bisexual, although sometimes they overlap. Compare Repulsive Ringmaster, which is similar, only with a circus or carnival instead of a kids' show, and Evil Puppeteer, with a puppet show.

Just like Arlo, he's haughty and a huge dick to his coworkers behind the scenes.

Just like Arlo, he's haughty and a huge dick to his coworkers behind the scenes.